The Shin Megami Tensei series of videogames is one quite close to my heart. It brings two of my favourite worlds together: mythology and RPGs. The franchise as a whole has many different branches and is mostly known for its spin-off series in the west: Persona. The first two Persona games (the second being a duology) didn’t do amazingly over here, but Persona 3 was a popular entry and introduced many to the series. It’s often hailed as the JRPG franchise most able to compete with Final Fantasy and Dragon Quest.

There are many common themes in all of these games: apocalypse, demonology, law vs. chaos, free will, religion, demonology, belief, technology vs tradition. And with richly written characters and swathes of demons and gods and mythological figures to fight and fight with, these games are just right up my alley.

A theme that the Persona series specifically features quite heavily (less so in Persona 5) is the idea of the persona as a psychological aspect of a person’s personality and experience of life. The writers of Persona took a great deal of inspiration from Carl Jung, who was a psychoanalyst who is second on the list of famous psychologists most laypeople can name. Like he-who-must-not-be-named, Jung was key in the conceptualisation and tentative understanding of the unconsciousness and what the unconsciousness entails.

Jung posited that there is a collective unconscious that exists between all humanity. He theorised that every part of a person’s being, personality and all of their traits are present within them from birth, and that the environment brings these parts to the consciousness, rather than forming them itself. Jung believed that there were specific archetypes that form patterns of behaviour that are present within every single person’s specific blueprint for life, and are a significant influence on this collective unconsciousness. These take the form of archetypal events (birth, death, union), archetypal figures (the old man, the old woman, the animal, the shadow), and archetypal motifs (the apocalypse, creation, flooding). These archetypes are so ingrained in the collective unconscious, that they find themselves present in the conscious in the form of our stories, our traditions and in our roles in society. Jung believed this explained why funerary rites are a trans-cultural phenomenon, why ‘wise old women’ often became figures of mystique, magic and lore, and why mythologies from peoples who would never have been able to interact would all have a trickster figure. They are archetypes common to every living being, brought out of the collective, human unconscious. 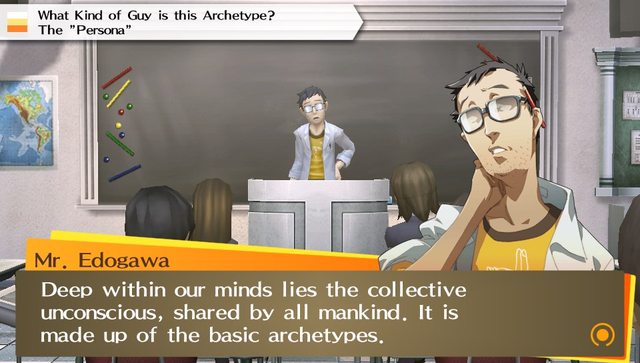 The persona, on the other hand, is a totally different kettle of fish. The word ‘persona’ has its roots in Latin, where it means ‘mask’ and refers to the masks that actors would use when performing. This meaning is taken quite literally by Jung, who posits that the persona is the mask that we as social creatures use to present ourselves in the world. We have many personas for different situations, whether it’s home life, work life, shopping, travelling. The main point here is that the persona is not the true self. It is simply a mask.

The difference in nature between the true self and the persona is a potentially troubling one. A person who overcommits to the persona at the expense of the true self can cause an internal imbalance, with Jung suggesting that they would have “little or no concept of themselves as beings distinct from what society expects of them.” The alternative however, a person without a persona, is a person who is “blind to the reality of the world” and an “eternal Cassandra, dreaded for their tactlessness, eternally misunderstood.” Thus, the ideal goal of the individuation process which every person goes through as they develop out of the collective unconscious and into individuals of self-realisation, would be to cultivate a persona that allows them to navigate society but that is also harmonious with one’s true self. In Jung’s words: “in the best case, the persona is appropriate and tasteful, a true reflection of our inner individuality and our outward sense of self.”

In the Persona series, personas are tangible manifestations of a character’s personality that they use to confront challenges (read: fight in turn-based battles). They are often representative of that person’s identity, and are malleable, changing when the character undergoes a personality change or overcomes a particularly tough challenge. This is exemplified in the story of Ken Amada of Persona 3. Ken is a character driven by a need for revenge, and thus his persona takes the form of Nemesis, the Greek goddess of divine retribution and revenge. During the story, Ken resolves to give up his quest for revenge (the reason being the target of his revenge plot had just, you know, died) and looks towards the future instead of living in the past. As a result, his persona changes, becoming Kala-Nemi, a figure from Hinduism representing the universe and fate itself.

The way the games handle personas is an interesting take on Jung’s theories. As you may have noticed, the personas in the game take the form of demons, gods and figures from many different cultures. The game features popular deities like Loki and and the Phoenix, and far less well-known figures, such as Yurlungur, an aboriginal copper snake who brings rain, and Maso, a benevolent Chinese goddess who protects fishermen and sailors. Persona 5 even goes as far to include figures from literature and popular legend, such as Arsene Lupin and Robin Hood. The games are not stating that these figures exist wholesale, as they often do in other games in the Shin Megami Tensei franchise, but they are justifying their existence in the world as representations of the archetypes of the collective unconsciousness. The justification for how characters can summon these personas to fight for them varies from game to game, but the justification for the forms they take on stay consistent. The games posit that these mythological archetypes exist ‘within the depths of the human heart’ which is what I believe to be their way of saying the collective unconsciousness. Demons and gods do not live in heaven, or hell, but in the hearts of humans.

In Persona 5 you visit Palaces, mystical areas created by the personal unconsciousness of various characters. They are physical representations of that character’s wants, desires and personal experiences. A greedy artist’s palace resembles a gaudy museum, for example. These palaces are ruled by shadow versions of the character the palace belongs to, and are infested by lesser shadows, who make up the random encounters that your party must face down.

The Shadow is another one of Jung’s inventions. He posited that the shadow consists of aspects of ourselves that we dislike, and would rather ignore, tucking them away in the back of our minds. Our ‘dark side’, if you will. In Persona 5 the shadow incarnations of the characters you meet represent the deadly sins. For example, a gym teacher who sexually harasses his students represents the sin of lust, and his shadow self is a being of lust, wearing nothing but a cape and small briefs whilst being fawned over by manifestations of pretty high school girls. The real-life owners of these palaces are unaware of their existence, and this is true to the psychological theory of it all: the shadow is a largely unconscious being, a collection of aspects of ourselves that we do not wish to acknowledge, witness or identify with.

The thing is, Jung theorised that the shadow is a necessary aspect of a person’s psyche. Without the shadow, people are shallow, ‘walking personas’ preoccupied with the world around them. Light and dark are required to facilitate healthy development and while we may shy away from the aspects within our shadow, and we may denigrate others for possessing those traits, the acceptance of those negative aspects of ourselves is crucial to the process of self-realisation. You know, according to Jung.