Fire Emblem: Three Houses has shown itself to be one of the biggest titles of the year, a somewhat surprise hit, with many attributing its success to its Harry Potter-esque presentation, its complex political history and its delightful cast of characters. I was quite happy, when playing through the game, to find a smattering of explicitly Welsh references. I thought it would be fun to take a look through them.

There will be some spoilers for the backstory of Fire Emblem: Three Houses.

One of the first instances of Welsh will come at the very start of the game, when local princeling Dimitri gives you a formal introduction and you learn that the name of his noble house is Blaiddyd. Something a bit special about this is that in almost all cases it is pronounced completely correctly, with a ð sound at the start of the second syllable (think the th sound in the word ‘the’). Most games that deign to use Welsh words that contain a dd will just give them a very anglicised d sound.

Blaiddyd (or Bladud) is a King of the Britons of legend, much like King Arthur (of sword in the stone fame) and King Cadwallader (of red dragon fame). According to legend, he was sent to Athens to train in the liberal arts. This parallels nicely with Dimitri’s story, as he is also in a foreign location for the purpose of training.

In Three Houses’s history, House Blaiddyd was founded by Blaiddyd himself, a hero and one of the 10 Elites known for fighting alongside Saint Seiros. Players will know that their actual history is a bit more muddled than that in reality, and that the weapons they used and the powers they gained were obtained by harvesting the blood and bones of the defeated Sothis, the goddess, and her children. Compare this to the legend of Blaiddyd, King of the Britons, who was thought to have engaged in necromancy to obtain otherworldly powers (namely flying).

This aforementioned monastery lies in the middle of Fodlan’s three main powers (The Empire, The Kingdom and The Alliance, naturally) and is the base of operations for whichever bunch of heroes you decide to ally with. Its name is Welsh (of a sort) and has some story significance.

One thing you need to know about the Welsh language is that words can change slightly depending on the words that precede them. Here we can see two mutations that seem to have been chosen completely arbitrarily to make the name of the monastery sound cooler. Garreg has been given a mutation from Carreg, the Welsh word for stone, and Mach has been given a mutation from Bach, the Welsh word for little. Put this together with Welsh using postpositive adjectives and you have Little Stone Monastery, a name that becomes more significant the further you get in the game.

Because, you see, the monastery is home to many crypts which contain mysterious crest stones. These magical objects are significant to the backstory. They were created from the hearts of the Children of the Goddess using ancient technology. Some were given to the ten elites, founding noble houses and a system of nobility where magical blood is attributed great importance. Considering the religious and historic significance of these relics, it seems appropriate that the monastery that many of them reside in would be named for them. This is what I believe, anyway. 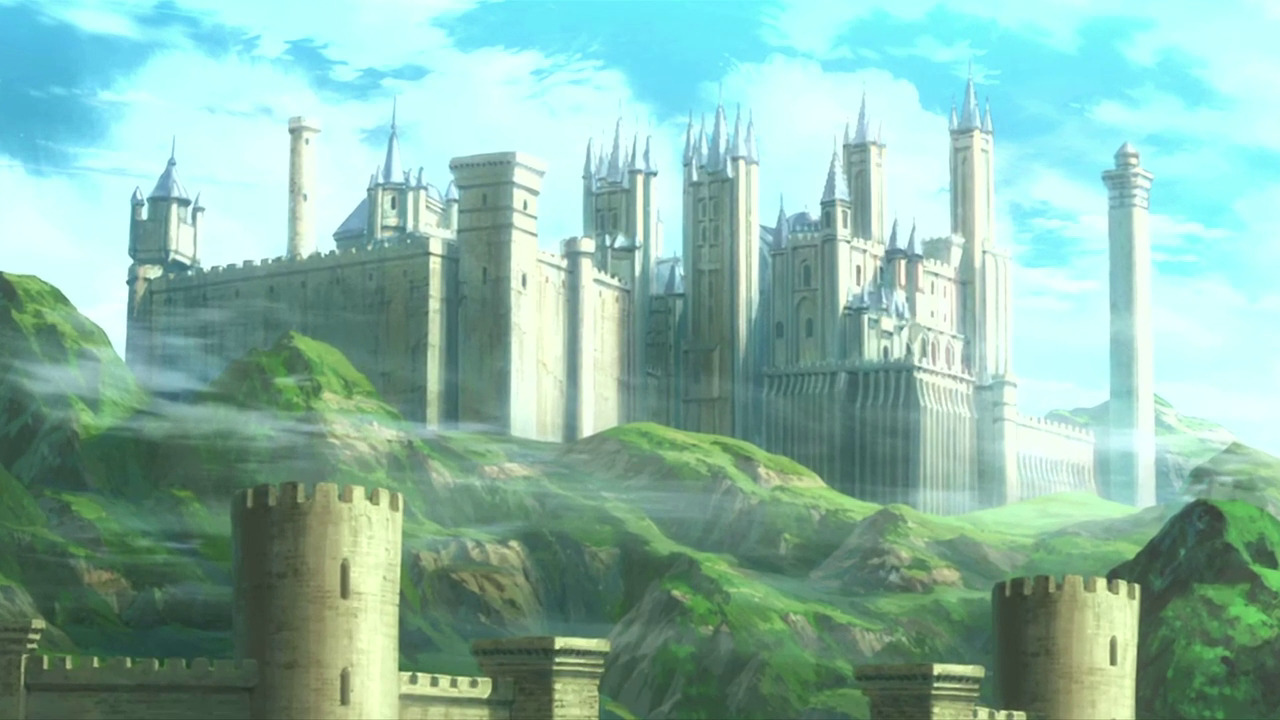 The Great Bridge of Myrddin

This huge bridge connects the Adrestian Empire and the Leicester Alliance, and is named for Myrddin Wyllt, a legendary figure in Welsh lore. He was a ‘prophet and a madman’ and the Wyllt in his name means Wild. It was said that he went mad watching the forces of his former lord suffer a devastating defeat at the Battle of Arfederydd, a hisotrical battle that occurred in 573.

One version of the legend tells of Myrddin being sentenced for his sins to wander the wilderness alongside beasts. He encounters a saint and begs to be given the last rites, as he has prophesied that he will suffer a triple death (a sort of mythological death whereby heroes and gods die from a mixture of falling, drowning and wounding simultaneously). Sure enough, later that day he is captured by shepherds, and cast into a river where he meets his final end, impaled on a stake.

The legend of Myrddin Wyllt and the tales of a 5th-century war leader by the name of Ambrosius Aurelianus came together in the great work of Geoffrey of Monmouth, the Historia regum Britanniae, where they became a composite character by the name of Myrddin Emrys, an enchanter whose life entwines greatly with the legendary King Arthur.

Something to note is that while the voice actors seem to have the ð sound figured out pretty well when saying ‘Blaiddyd’, the word ‘Myrddin’ is mispronounced every single time in the game.

Continuing the Arthurian theme, in the Holy Kingdom of Faerghus there is a place named Sacred Gwenhwyvar. This keyboard-smash of letters is the original Welsh name of Guinivere, King Arthur’s wife and queen.

Arianrhod, a great fortress city that features in the late-game, takes its name from a figure in Welsh legend. She is a figure of some depressing stories. At one point, she is forced to jump over a magician’s rod to prove that she is a virgin. In an interesting plot twist, she suddenly gives birth to a son and a suspicious blob who turns out to grow up into a hero called Lleu. She lived at her own palace, named Caer Arianrhod, and it is likely this that gives the Fódlan Arianrhod its name.

Gwendal, a map boss who fights the player on Dimitri’s and Claude’s routes, has a name that is derived from Breton, a celtic language similar to Welsh which originates from Brittany, the sticky-outy bit at the top-left of France.