Disco Elysium is one of those rare games that pulls you kicking and screaming into a huge, complex world that is both alien and familiar.

It puts you in the shoes of a man who appears to be a cop, in a world where the police are self-organised and operate in a dodgy zone of legality. You are a drug user who has woken up after a pretty solid bender, and you have lost your memory. You don’t know your name, you don’t know what case you’re on, and you don’t know the world around you. And you have to learn. You quickly meet your partner on the case, and the ball gets rolling from there.

I would describe Disco Elysium as a hybrid RPG/Point and Click Adventure, with a heavy focus on the latter. You have your ‘hero’ (if you can call him that) and you equip him with clothes that boost his stats, and you can pick up perks along the way as you level up. You gain experience by completing tasks and navigating dialogue choices in interesting and effective manners. There is no combat, there are no roguelike elements, and there’s a lot of dice-rolling to dictate how effective you are at navigating the world, like many videogame adaptations of classic tabletop games (Divinity: Original Sin, Pathfinder, Fallout, etc.). You may love this, and you may hate it. You may save-scum through the harder conversations, and you may let the dice fall as they may.

What makes this game especially unique is the style in which the developers have incorporated the RPG elements. You see, you don’t have classic stats such as strength and intelligence, instead you have 24 different stats that each comprise an aspect of the hero’s personage. They are separated into four umbrella skills: Intelligence, Psyche, Physique, and Motorics. When you start up the game, you decide what you’re good at and what you’re not good at with a standard ‘point-buy’ system: you have a limited number of points, and you can sacrifice points in one group of skills to boost another. Personally, I maxed out Psyche.

When you level up, you gain a skill point, which can be used to level up one of your individual skills. However, you can only level up a skill up to the maximum it has, dictated by your overall skill in that group. This adds an element of strategy in the game: do you try to compensate for your already weak skills to be an well-rounded cop, or do you max out your already great skills to become a super-empath, or a cop so in tune with his body that he can hear the city speak to him and break locks with his bare hands? It’s a super fun system that I could see adding replayability to a game in a genre where replayability is almost non-existent. Additionally, your clothes and equipment have a significant effect on your stats, and you may find yourself taking off your trousers at one point just to make a jump, as they are restricting and uncomfortable.

What’s especially interesting is that each of your skills has a distinct personality. Yup. As you play through the game and interact with objects and people, you will have a constant running commentary where you will converse and take advice from different aspects of yourself. Encyclopaedia will tell you facts about the world around you, Authority will tell you what to say if you want to pull rank on someone, Electrochemist will get excited and heated whenever you are around drugs, that sort of thing. Some are purely for flavour and drama (especially Drama), but some are also very useful. Empathy will help you understand people, Inland Empire is an especially useful skill for understanding some of the more esoteric aspects of the world, and Rhetoric will warn you when a specific dialogue choice will end badly for you. Impressively, they all have distinct personalities, and you’ll get to know the more chatty ones (most of the guys in Intellect and Psyche) quite quickly. They will chime in constantly, and they’ll be a boon during your investigation. I really love this aspect of the game. Truly. 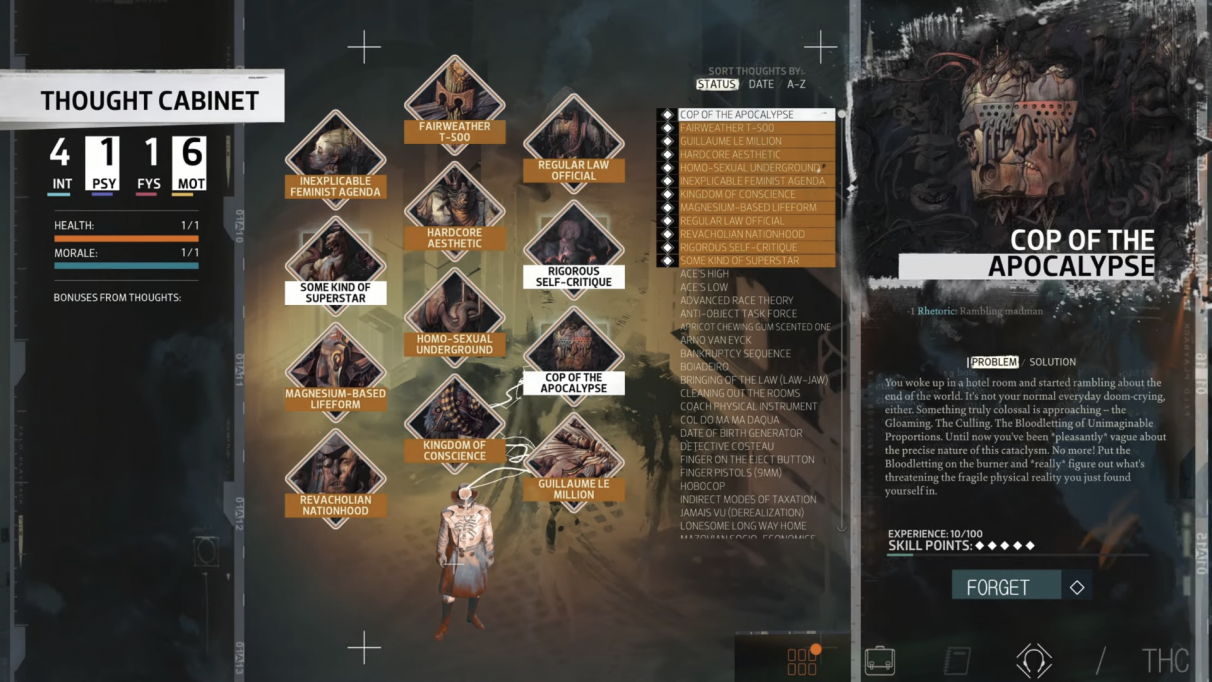 A similar aspect of the game is the Thought Cabinet. Think of this as your perk box. As you progress through the game and take certain access, you may pick up some Thoughts, such as an Inexplicable Feminist Agenda, or a genuine Art Degree. You can choose to internalise these thoughts, and they become a sort of ‘Backstory’ that you create for yourself, revealing new aspects of your past, granting you boosted skills, some extra passive abilities or some additional dialogue choices. You can spend skill points to forget Thoughts if you don’t like its effect (something you only find out after internalising it, which takes some time) and pick a new one.

I find this a very interesting and engaging method that the game uses to involve the player in the reality of the hero’s memory loss and the reconstruction of his past. And there are a vast amount of Thoughts to find. Building the hero up with specific Thoughts is a fun process, and it’s a surprisingly novel way to desegregate storytelling from gameplay.

The game is a very gorgeous game. The art is beautiful and the sound design works so very well for the medium. It feels melancholic, and peaceful even when there’s no time to rest. The city of Martinaise feels like the calm after the storm, and it’s quite haunting.

I don’t want to spoil much of anything to do with the setting or the story, as I feel it is a game you will want to experience blind, as the hero does. You will learn as he does, and your reactions will become his reactions. You will be bombarded with proper nouns and geography without diagrams, and lots of confusing shit. And it kinda works.

The one thing that I would recommend for a first or only playthrough is to make sure you have a decent Intellect and pump some skill points into Encyclopaedia. It will chime in a lot and give you so much information about the world that surrounds you, and it’s interesting. It’s a world that has obviously been in someone’s mind for many years, with a history and a geography and its own languages and customs, growing and growing – and although it’s eerily similar to our own, it is always interesting to learn about.